Changes to AFL Fantasy in 2013 – Jumping the Shark with full rolling lockout? 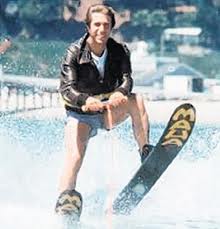 But you don’t have to be Bill Collins to identify the moment that Fonz strapped on the old skis to jump the shark pit as a moment when things went south for those crazy kids.

Now I’m not here suggesting that the rule changes announced this morning spell the beginning of the end of AFL Supercoach as we know it. I bloody love this game and I see a long and prosperous future for all forms of Fantasy Footy in Australia. But what I am suggesting is that flirting with major change when something is already top notch is a risky business. If it ain’t broke don’t bloody fix it.

See what happened to my favorite VB? Changes to the alcohol content (a bloody travesty) and the recipe have just been reversed coz drinkers voted with their stubby holders and sucked something else. While changes to the number of bye rounds do call for some change I don’t believe that Kevin Bartlett across the board change needs to be made. Don’t get me wrong kids! I occasionally snag a slab of Melbourne Bitter instead of Tooheys New to mix things up and take advantage of price changes. But mark my words – I stick to what works on the other 6 days of the week.

Well here I am prattling on… how about we look at some of the changes;

Hells bells. We’ll all be sitting by the wireless listening out for those late changes before every single game of the round. You’ll be able to make changes to your team right up until eachgame starts. No Friday night lockout for the whole round.

Might sound great as many of us of the hardcore persuasion will be able to avoid those last minute change mishaps. But in reality do we all really want to sit there all weekend biting our nails clicking our computers and tappin on our iphone thingos looking for these changes?

The one risk that Dreamteam and Supercoach runs here is losing the players that just can’t keep up with the elite.

I’d already noticed people dropping out of leagues when they can’t cut the mustard against others who live and breathe the game. This just makes it that bit harder to stay competitive for the fringe of fantasy football coaches.

We risk losing the fringe to the game here.

Not sure how I feel about this one… probably a good thing. I suppose we’ll be forced to be more creative with our midfield selections and there’ll be more variation between teams in the midfield.. on the flip side our forward and back lines will look a bit more vanilla.

An increase up from 3 – not such a bad move I reckon. However does mean that an aspect of the fine art of pre round selection is removed

The weekly podcast is back! Click here to listen into Jock, Higgo and Crouching in this week’s episode

Hi Jock – Rolling Lockouts sound good in theory but in reality can (and probably will) will be a burden. Rolling Lockouts were in Supercoach Pro last year, which I played, and at times it worked for me and other times not – I don't think our wifes or partners will like this rule change. As for the 8 midfielders (subject on salary cap – do we know what that is Jock) and 4 emergencies I think are great ideas. Thanks for your update and can't wait for the action to begin.

Seems all a bit too easy now.. What about us old schoolers who love a challenge! Ain't broken don't fix! Bloody hell jock me old mate..

Hells bells and buckets of bloodstained angels….. Might as well get the divorce over with now so it doesn’t impact on the season, wifey won’t like me being online all weekend!!

Loving the 8 midfielder rule … will mean that there will be so much more variety in teams. Lets face come the end of the year all the top teams started looking very similar.
4 emergencies sounds good too .. nothing worse than a late withdrawal on the one line you didn't have an emergency selected
but rolling lockout .. not a fan .. already spend so much time on SC, and with this, i just know i'll be playing with my side all weekend .. goodbye relationship 🙁 .. dam i really loved that girl

Great to have you around again MJ! I will be releasing a few spreadsheets shortly that I am sure you will find interesting.

I don't think fwds will be vanilla with the DPPs…

Should be bloody 8 midfielders too and it probably means bigger scores! And I like the rolling lockout. Those who pay attention to the game have an edge!

Leave the rolling lockouts for the Pros! They might not have a life but for the 90% rest of us, we can’t afford the time or iphone bill to constantly change at every Club’s last minute selection. As it is, call it for what it is – bloody Bingo after Friday’s lock in!

There is also a maximum of 30 trades now, 6 more then last year. This will provide much needed relief.

Don't mind the rolling lockout and having the 4 emergencies makes sense. I wonder if the 'Vice Captain/Captain swap trick will now be available to use every week?

8 midfields will be good for scores, but it will be interesting to see how players change their team selections because of it. Do you pack your midfield full of 8 guns and leave the cupboard bare elsewhere? Or go half premiums, half rookies, or maybe 5-6 premo's and 2-3 rookies? Will make picking rookies elsewhere all the more important, as if they don't increase the salary cap you'd have to be taking some $ out of your def,ruck and fwd line to pay for the extra 2 premiums in your midfield. Or if you go for 6 premiums, you now have to find 2 cheapies who are going to play every week. Tough decisions ahead.

Very tough decisions ahead mate agree. On the midfield scenario it will be an interesting toss up between stuffing your mids full of promos or stacking up on the lucrative rookie midefielders

Sweet Jebus old son! What is going on! Seems a bit mad they make all these changes at once, I’m not sure a rolling lockout is needed when you have 4 emergencies. I bet that Dr Dreamteam bastard has something to do with this. You should send crouching over there to sort those muppets out. HAYAAAAH , WELCOME.

Hate the extra trades. Hate the rolling lockout. bring back 20 trades as this makes you think about every one and rue the mistakes. the rule changes are making me feel flat about SC and DT

I dont see the point of having a rolling lock out and then 4 emergencies aswell, its basically the same thing, there wont be many times through out the year you have 2 players in the same line pull out before the game.
30 trades makes it to easy if you dont have a full team of premos, including emergencies by the finals this year then your a bloody muppet and dont deserve to be in the finals !!

No doubt that things have been made a little easy for the new comers. On. The upside I spouse we will keep more people interested in the great game

Distinct advantage for those with no social life. It is for this reason that I like the rolling lockout – I will be very hard to beat! I hope they remove the feature that enables others to see when you are online ….. I would prefer my obsession to remain my own shameful secret.

By jingoes Jock, you cannot stop the evolution of change.

I would like it that no one sees my team and I don’t see there’s. This would take the copy cat mentality out of the game. Your thoughts?

Well I am out of DreamTeam and Supercoach, having a reasonable amount of suceess 223rd in DreamTeam in 2008 and 161st in Supercoach last year I refuse to participate if being competitive means constantly checking teams all weekend (rolling lockout), I borderline spent too much time on it as was last year. Ridiculous idea.

What I am looking forward to with the rolling lockout is not getting screwed over so much with the sub rule. For me it had too much effect on the outcome of games, particularly at the start of the year. At least now you can see if one of your playing rookies is starting as sub and make a change rather than basically going in a man down.

Excellent beat ! I would like to apprentice
while you amend your site, how can i subscribe for a blog site?

The account aided me a acceptable deal. I had been a little
bit acquainted of this your broadcast provided bright clear concept

Only the amount moved is interest free. It is necessary, however, to
go shopping carefully and watch for things that could make that zero-percent
offer anything but a good offer.

Piece of writing writing is also a excitement, if you be acquainted with
then you can write otherwise it is difficult to write.

Greetings I am so excited I found your web site, I really found you

by error, while I was looking on Aol for something else, Regardless

all round interesting blog (I also love the theme/design), I don’t have time to browse it all at the minute but I have saved it and also added in your RSS feeds, so when I have time I will be back to read a great deal more, Please do keep up the excellent job.

Do I trade Hobbs to baker this week? Or hold Hobbs and trade him to libba/English/Brodie next week? Will be final upgrade. #supercoach